Carolo Cup. The stage of a robotic car model design is completed.

Is scope of DAAD exchange program, Vasyl Varovolik and Mykyta Slyvkanych, who are student of the Department of Automation of Electromechanical Systems and Electric Drive, have run the international training course in Mittelhessen University of Applied Sciences (Technische Hochschule Mittelhessen – THM) since October 2017. In addition to the studies, their key task is the participation in Carolo – Cup 2018. 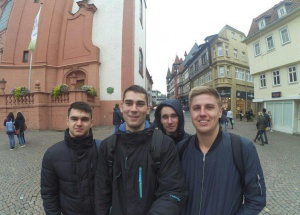 For the competition purposes, the fully automatic model of car was built (see photo below). A previously trained multilayer neural network is used in order to orient the model and recognize road lines. After debug and tests, the robotic car will be presented at the Carolo-Cup 2018 championship that is held in February 13-14 in Technical University of Braunschweig (Technische Universitat Braunschweig). Carolo – Cup is the annual interuniversity competition that is held in Technical University of Braunschweig (Technische Universitat Carolo-Wilhelmina zu Braunschweig) in Germany with Volkswagen, Audi and other world-wide known companies as partners. The student teams compete and solve relevant problem in a field of automatic transport.

During the season, a fully automatic 1:10 scale model of car is built. Moreover, the recognition of the surrounding should be performed by the designed algorithms. Also, the model should perform overtaking of moving and static obstacles, road lines and signs recognition, etc. In addition, the developed concept must be present and explained.